My dissertation is intended to open up a new perspective on German broadcasting history by describing its prehistory in historical deep boreholes. The ‘media culture history of the spark’ explores the question of what it means in concrete terms that radio in Germany officially developed under the name broadcasting. The difference between broadcasting and radio is, according to my thesis, by no means banal and contains more than a reference to the (electrical) spark as a way of generating electromagnetic waves as opposed to “rays”. By revealing the relationships between the use of technology and the use of terms, other perspectives on the specifics of the medium in its historical and territorial contexts become possible. The investigation takes place in the form of case histories, which will range from the semantic and technical elaboration of the electrical spark in the 18th century to the definition of the term broadcast and the associated institutionalization of radio in Germany by Hans Bredow between 1919 and 1923.

It can currently be observed that the field of terms relating to sending and receiving has moved massively with the change in technical configurations. For many, even in the broadcasting corporations themselves, there is little doubt that broadcasting as a media-political idea now has a somewhat museum-like effect. At the same moment, however, the field unexpectedly revived, because the syllable “funk-” is currently not only used by network activists to give themselves ironic self-legitimation (“Are we broadcasting yet?”). ARD and ZDF have recently started advertising officially under the name FUNK (pronounced ‘u’) as their latest online platform for the youngest target group of the public. The changes in broadcasting and receiving practice have made the term technically obsolete, but its potential as a metaphor seems to be unbroken. The dissertation regards radio and radio as an object of media culture history in which the use of technology and language are historically correlated. This should also broaden the view into current contexts.

Kai Knörr, born in 1978, studied history, politics and media science at the University of Potsdam and FU Berlin. Master’s thesis on the feature films of the writer Wolf Schmidt (1913-1977), who as an auteur filmmaker in the mid-1950s provided an early example of cross-media production in the transition from radio, film and television. 2010-2014 research on the history of serial entertainment on ARD, since winter semester 2009/10 lectures in the course European Media Studies with a focus on broadcasting history, sound and new German film. Since 2014 research on the dissertation project in the department of media culture history at the University of Potsdam. 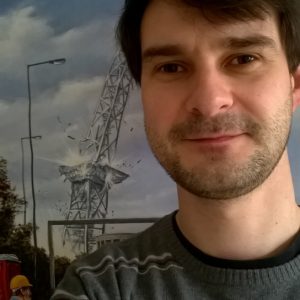