What is the ZeM?

The Brandenburg Center for Media Studies (ZeM), which was officially founded in 2016, is a networking, research and funding center for the field of media studies and related fields/ disciplines in the state of Brandenburg, Germany. 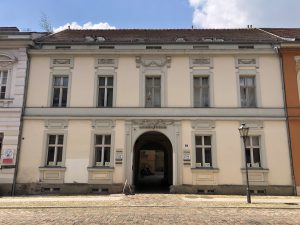 ZeM office at Hermann-Elflein-Strasse in Potsdam

The ZeM supports media science research, interdisciplinary networking and external scientific transfer. In this way, the ZeM contributes to the further profiling of the state of Brandenburg as a media and science location. A unique feature of the ZeM is the strategic partnership between three different types of higher education institutions. In media studies research, the ZeM actively promotes exchange and cooperation between universities, universities of applied sciences and art colleges.

The ZeM currently has around 100 members. The work of the ZeM as well as its content orientation are led by a five-member board of directors, coordinated by the employees of the ZeM office and controlled by a board of trustees, consisting of representatives of the participating universities, the Brandenburg Ministry for Science, Research and Culture and the chairman of the scientific advisory board, which supports the ZeM in its content work and orientation.

ZeM members can apply for various forms of support such as scientific events, public events, or scientific publications. A ZeM membership is open to everyone associated with one of the participating Brandenburg universities. We look forward to receiving your membership application.

As a media studies institution, we are committed to the goals and principles for good working conditions in media studies (as defined by the GfM). We advocate stable employment foundations at all career levels and take measures to create a family-friendly and non-discriminatory work environment. We are committed to promoting participation in decision-making for all employees.

All ZeM members are cordially invited to join the roundtable with the US delegation of the Daring Media project.

Teresa Heffernan points out that while the field of Artificial Intelligence is full of “fathers”, “mothers” are noticeably absent.