Kate Donovan is a practicing radio artist, facilitator and researcher based in Berlin. Her artistic practice deals with radio in an elemental sense, in terms of frequency, transmission and interconnectedness (but also disruption and interference). Her editorial and organisational work in free and community radio fosters inclusion and experimentation.

She studied Fine Art: Time Based Media (BA hons) at the Hull School of Art, UK, and Anglophone Modernities in Literature and Culture (MA) at the University of Potsdam, with a thesis titled “Expanding Radio. Ecological thinking and trans-scalar encounters in contemporary radio art practice’.

Recent and current projects include: Datscha Radio 17, a garden radio art festival on the future of the garden in the Anthropocene; ‘The Bespoke Headpiece’, a speculative telling of radio history which was developed during a transmission arts residency at Wave Farm in 2018; and the ongoing radio show ‘elements’, which broadcasts monthly via CoLaboRadio, on FM in Berlin and Potsdam, and online. 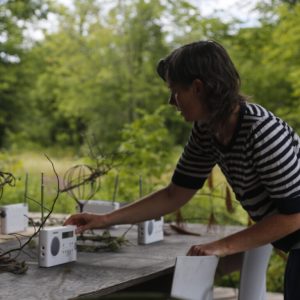