Digital technologies are interwoven and interconnected in a complex way with the cultural, social and political life of the individual. Especially against the background of the increasing ubiquity of human-machine interactions, the focus is also on their potential to both enable and prevent social participation. For example, what is considered normal and what is in return as deficient or deviant is always implicitly or explicitly written into the interfaces between man and machine. People with disabilities are only one of the user groups who are regularly confronted with norm bodies inscribed in information technologies and interaction paradigms (or with their deviations from them). Sociocultural inclusion is by no means a self-evident by-product of what is widely affirmed as technological progress, but can only result from a conscious attitude (or change of attitude) with regard to their design process.

This research examines digital communication media in museums for the discursively and socio-technically generated construction of normality and deviation. The aim is to uncover forms and practices of inclusion and exclusion that digital media produce in a specific way: e.g. by privileging certain senses and body parts with regard to their use. The categorization of bodies in the sense of an attribution of Dis / Ability is to be considered primarily from the perspective and within the radius of action of designers of digital communication formats. On the basis of workshops with people with and without disabilities (museum visitors and non-visitors, museum specialists, curators, decision-makers, …), evaluable prototypes for inclusive human-machine interfaces are to be created in an iterative design process. The formation of theories should be checked, expanded and refined using the findings from the analysis of the prototypes and their evolution. The dissertation aims to close a research gap in the area of ​​inclusive, digital communication media in museums, which is manifested above all in German-speaking countries.

Nicole Schimkus, born in 1987 in Bergen auf Rügen, studied interior design at the Wismar University of Applied Sciences and interface design at the Potsdam University of Applied Sciences. As a freelance designer, she has devoted herself to the conception and design of exhibitions for several years. Her master’s thesis examined the postmodern individual in the context of the museum as an institution and dealt with the development of concepts for the individualization of the museum experience. 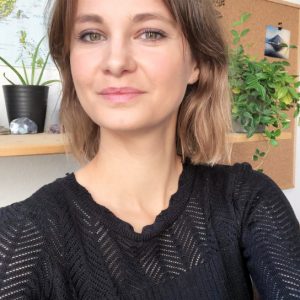