Theatre, film, literature – at different times the storyteller and explainer Thomas Harlan (1929-2010) sought out new forms of expression for his uncomfortable subjects. One of the constant preoccupations is with the heritage of National Socialism. Harlan may be considered a pioneer in dealing with the Holocaust in a criminal sense and his artistic creation – from his early theatre activity till his late literary work – testifies to a lifelong intensive engagement with both the period of National Socialism and his own family’s history. In the 1970s and 1980s he was prominent as a dedicated film-maker and political activist.

The amalgamation of different analytical and biographical approaches present in this volume constitutes the first comprehensive look at the strategic transgression of genre boundaries and the radical undermining of the conventions of depiction in Harlan’s work. Among the contributions are those devoted to the films, the novels Rosa and Heldenfriedhof, the reception of the play Ich selbst und kein Engel and an examination of the traces left in Harlan’s work by the ambivalent relationship with his father, Veit Harlan. The sources used include previously unpublished texts and documents from Thomas Harlan’s estate. 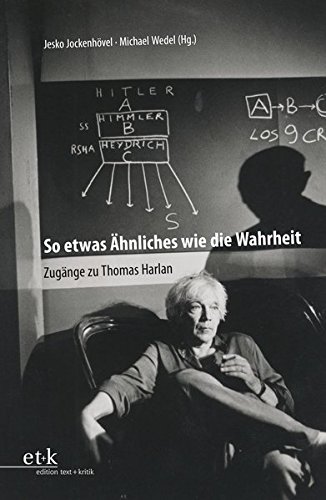